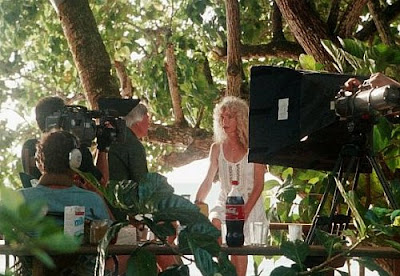 Discovery Communications has twisted and warped the interviews of researchers on sharks since 1987 in order to present them as scary and dangerous, while pretending to be telling the scientific truth.

Now we are in the Year of the Shark and once again Discovery will make millions of dollars by casting sharks as monsters in Shark Week 2009.

The new titles are:

BLOOD IN THE WATER (focuses on shark attacks)

DAY OF THE SHARK (focuses on shark attacks)

GREAT WHITE APPETITE (focuses on the most frightening shark species)

As the large species of sharks approach extinction, Discovery's deliberate misrepresentation of them to encourage people to hate and fear them, is a crime against life.

All efforts to reason with those responsible have failed, (see below) so the members of The Shark Group felt obliged to go to the next level of protest.

We wrote the following Manifesto, calling for a global boycott against Shark Week programs, and posted it on the petition site.