Rebuttal to Criticisms of Observations of Sharks 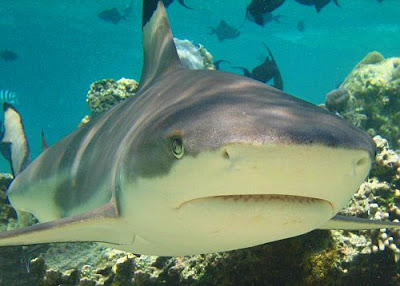 Since my posting resulted in much disagreement by those whose experience with sharks comes from watching television instead of sharks, this added explanation seemed necessary.

I am not implying that sharks do not use their mouths and teeth. Indeed they do, since their mouths are their one part adapted for the manipulation of the solid fraction of their environment.
They investigate objects by picking them up and feeling them with their mouths.

My point is that they don't raise their heads and bite automatically in moments of aggression as terrestrial vertebrates generally do. Even people in extremis will bite; instinct takes over when survival is threatened.

When my sharks got mad at me they didn't bite me--they slammed me.

The late Arthur Myrberg, who was an ethologist, listed many shark species he had watched in nature, and he told me he had never seen sharks fighting. I never saw them fighting either. Further, they maintain little or no inter-animal distance.

I have heard of white sharks biting others for allegedly territorial reasons, but the species has also been shown to have a ritualized conflict exchange, so they still seem to show less aggression than terrestrial predators.