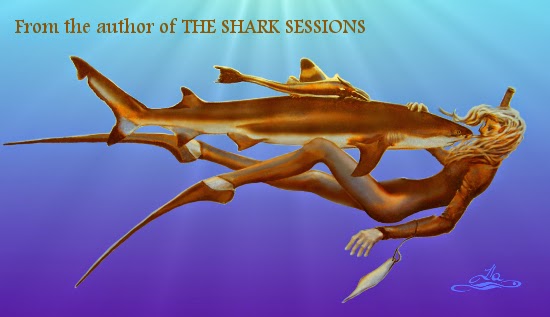 Shark Week in 2014 reveals the same old Discovery Network continuing to rake in a fortune by portraying sharks as the monsters of the human imagination.

By convincing viewers that sharks are man eating killers just waiting to saw them apart, since 1987, the company has facilitated their mass slaughter, including in monster tournaments along the east coast of the US, with almost no public sympathy nor protest.

And now, even non-fishermen can participate in the massacre by consuming the flesh of endangered shark species in American restaurants devoted to the Shark Week carnage.

The sad outcome underlines how the Discovery Network has erected an impenetrable barrier to their protection, of which the larger species of sharks that are accessible to fishing, are threatened with imminent extinction.

It is daunting to look out at the sheer power of destruction exercised by just this one corporation, in the results of its work. Reflection on the mega death it has caused just chills your soul.

The situation also raises serious questions about the psychology of a society whose future depends on creating a sustainable way of life.

When confronted about what they were doing by representatives from The Shark Group in a meeting in 2008, Discovery executives assured them that they were happy with their “shark pornography” as they called it. They bragged about the multi-billion dollar profit that their shows generated, and said that they were giving the audience exactly what they wanted by presenting horror shows.

They were unconcerned that it was they themselves who had made sharks the subject of that horror.

They were also unconcerned about the ethics of showing sharks as being very different from the way they really are, while claiming to be presenting scientific fact.

Shark Week has never produced a documentary showing the reality of shark finning, though that would be relatively easy for them considering the difficulties they seem to have in filming underwater.

And they have never produced a documentary showing the positive social behaviour of sharks, their intelligence, or any other documentary about sharks as they really are. Even sequences showing sharks swimming normally, are often manipulated to make them appear to speed up and slow down. It would be physically impossible for a shark to swim that way, yet that is one of the ways that the Shark Week creators try to make sharks look “scary and dangerous.” There are countless other examples, some of which are described in former postings below


But unfortunately Shark Week audiences are unlikely to go and try to find out about sharks for themselves, because, due to their taste in television shows, they are actually afraid of them!
eating threatened species My Sunset Rendezvous shark behavior shark week sharks The Shark Sessions

When I was on Shark Week in 2004, I gave this message to their film crew and presenter, Mike DeGruy. But it was suppressed because it contradicted the dangerously stupid and bloody-toothed image of sharks that they wanted to convey.  So it is now in a short video, along with the news that what is known about wild shark behavior has now been published. Sharks are not the cold and senseless monsters described by fisheries science and the media. They are ordinary animals, thinking about their lives, each one with a perspective that matters to him. The True Nature of Sharks is a full scale exploration of wild shark behavior. Drawn from fifteen years of observing sharks underwater as animals and individuals, it reveals a new dimension of understanding of their lives. This timely book will make the mysterious world of sharks come alive for you, and show you how the flexible and complex actions of the sharks reveals their conscious intelligence.
Read more