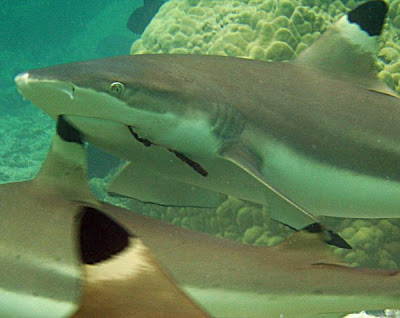 Here is a description of the results of the release of the movie 'Jaws.' It is an excerpt from a book about shark fisherman, Frank Mundus, who led the massacre of sharks off America's East coast. Its called 'In the Slick of the Cricket' by Russell Drumm.

Prior to that, sports fishermen had mostly targeted fish to eat, and considered sharks to be 'inedible as snakes.'

“In Act One, a hundred plastic boats explode to life, tearing out of Montauk harbour (and every other harbour along the East Coast) before dawn, with enough engine and fuel to get them 30 miles offshore and back by evening weigh-in. At a $400 per boat entry fee, its Jaws glory and big cash prizes that drives them on...

“Act Two: In the afternoon. Flags and pennants fly. Blues, makos, hammerheads are raised on gin poles for the triumphant harbour entry. Hoisted again to the scales, in turn, to the ooohs and aaahs of hundreds of onlookers wearing tee-shirts advertising sharks, advertising marinas, ad infinitum. Oooohs and aaaaahs. The marina barker barks weights and the names of boats like Mako My Day... Daddy's Toy...... Four play.

“Yeeuk! squeals, as fisheries scientists, performing necropsies on already weighed beasts, turn the dock into a giant pizza with the works.

“Act Three: Nightfall. The rotting juice of the competitors' tons of discarded sharks drips from the marina's 20 yard dumpsters. Next day, in the landfill, small mountains of sharks, still graceful in their piles, are claimed by seagulls and flies.

“….I'm howling now at the captain's description of the victory-over-blue-shark ritual performed by his early anglers: “At first they brought 'em home to dump in somebody's swimmin' pool, to hang up somebody's flag pole. When we first started shark fishing there were blue sharks that wound up just about any place you could imagine. They put 'em in the phone booth here in Montauk... There was a blue shark in it the next day, standin' up. They had him all propped up, and they had his fin tied, had a hat on him, had a cigarette in his mouth. He was supposed to be makin' a phone call.” Ha ha oh boy.”

Later, when catch and release began to be practised due to concern that the sharks were already disappearing:

“ “Happy horseshit” says Frank. Without the Jap hooks he used, the ones designed by Japanese longline fishermen to stick in the jaws of fish, feeling good about tagging and releasing sharks was folly. The cheaper hooks bought by the weekend warriors were more often than not swallowed by the sharks which then fought their final battle gut-hooked. After being released, most sank to the bottom, dead.

Mundus said “Maybe two out of twelve are hooked in the mouth. Add it up along the coast.”

Our concerns about Discovery's portrayal of sharks a la 'Jaws' are due to the fact that the resulting hatred and fear of sharks motivates people to go out and kill them. This is even more of a concern because 'Jaws' was known to be a fictional horror movie, but Discovery claims to be showing facts about sharks when it refers to them as monsters, mindless killers, and countless other similar terms.

Discovery's continuous depictions of sharks as monsters is feeding the same killing frenzy which is seen in the countless shark fishing tournaments we are seeing now advertised one after another over Internet.

They are as responsible for the flight of sharks towards extinction as long-liners and shark fin soup through their mongering of lies. They not only have erected an effective barrier to shark conservation, but motivate thousands to go out and slaughter them.

The link to the Manifesto denouncing Discovery's practise, and demanding that they begin to portray sharks as they really are is listed on the right under Links.

With my thanks for hearing me.